View cart “Raising a Mensch” has been added to your cart.

Patterns on Parchment: The Structural Unity of the Five Books of Moses

“For centuries, people have been perplexed over the apparent randomness and abrupt transitions in the narratives and laws contained in the Torah. While the Talmud, Midrash, and later commentaries such as Rashi and Ramban offer sporadic explanations for a number of these instances, many remain unexplained. The failure to discern an intelligible pattern in the Five Books of Moses is not simply a literary concern; some scholars have used this apparent lack of coherent organization as proof of multiple patchwork authorship, thereby undermining the fundamental principle of the Divine origin of the Torah and the binding nature of mitzvot.”

Thus begins Rabbi Yitzchak Breitowitz’s foreword to this new book – and thus begins a most fundamental question: can we see the unity of the Torah? How does it manifest itself?

After many years of research and based on Rabbi Honigwach’s original thesis, in this groundbreaking work Dr. Robert Appleson  demonstrates the inherent and beautiful structural unity of the Torah itself. This is a book like no other.

“…I have been greatly impressed by the methodology of your research and analysis. Besides the background use of the basic Midrashic texts, your novel use of mathematics in establishing patterns and interpretations truly support the integrity of the Torah as a divine document…”

“…the attentive reader who carefully studies and digests the ideas in this book will walk away with a deeper and more profound appreciation of the infinite wisdom of the Creator that is embodied in His holy Torah. There is surely no higher praise that can be bestowed.”

People have long puzzled over the seemingly random progression of topics within the Five Books of Moses. Bible critics have seized on this perceived randomness as evidence of multiple authors, thus dismissing the essential principle of the Torah’s divine origin. Through the abandonment of this principle, adherence to traditional values has declined.
What if the perception of randomness in the Torah is false?
In a brilliant but largely unappreciated study, Rabbi Yehoshua Honigwachs described a highly synchronized framework closely connected to the paragraph structure on a Torah scroll itself. In Patterns on Parchment, Dr. Robert Appleson expands this concept so that readers — whether laypeople or clergy, with or without knowledge of Hebrew — can see for themselves the inherent unity of the Bible, attesting to its single authorship.

Dr. Robert Appleson was born in Memphis, Tennessee, and was taught in his youth by Rabbi Ephraim Greenblatt, zt”l, to whom this work is dedicated. He is a trained mathematician (Ph.D., Vanderbilt 1975), who retired in 2014 after many years as a vice president for the Higher Learning Commission, an accrediting body for colleges and universities in nineteen states. Now spending most of his time studying at the Illinois Center for Jewish Studies, he and his wife are blessed with three married children and their spouses, each with children of their own. He has published articles in the fields of mathematics, educational policy, and Jewish studies.

“Dr. Appleson is uniquely qualified for this daunting task…based on his familiarity with mathematics…and classical Biblical commentary. [He] leads the reader by the hand gently… [Readers] will walk away with a deeper and more profound appreciation of the infinite wisdom of the Creator….”
RABBI YITZCHAK BREITOWITZ,
prominent scholar, lecturer and writer

“I have been greatly impressed with the methodology of your research and analysis… your [work] truly supports the integrity of the Torah as a divine document. Your work is a worthy addition to the Torah literature of this genre.”
RABBI GEDALIA DOV SCHWARTZ,
Chief Judge, Rabbinical Council of America and CRC 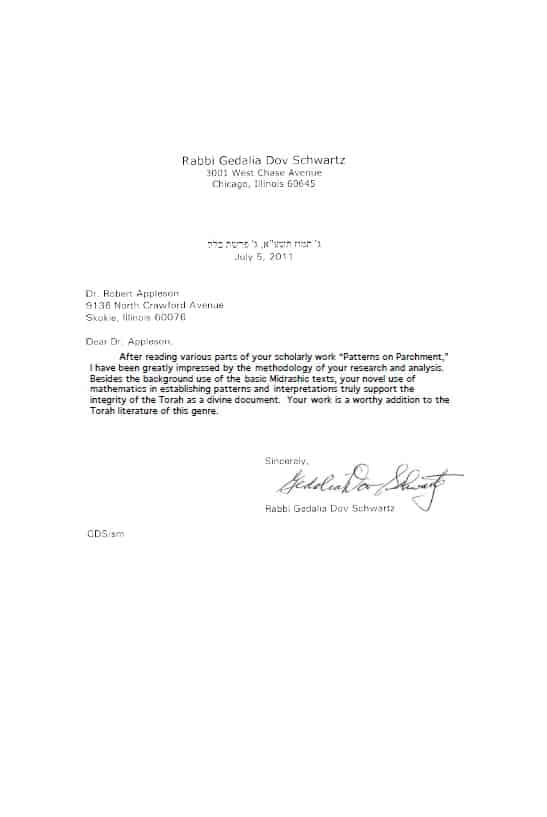 Be the first to review “Patterns on Parchment: The Structural Unity of the Five Books of Moses” Cancel reply

Patterns on Parchment: The Structural Unity of the Five Books of Moses
$24.99
Add to cart